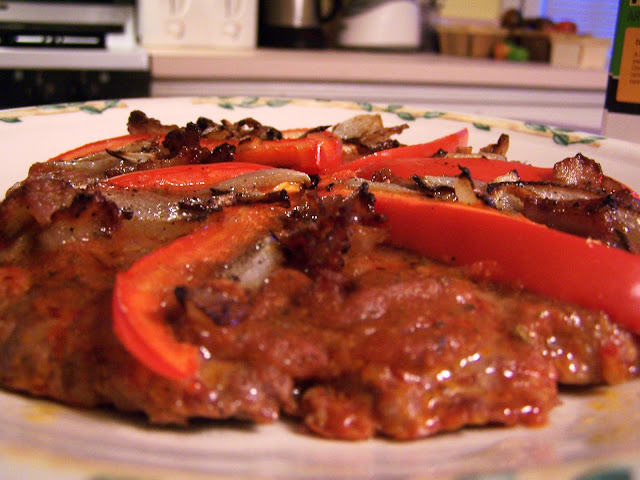 It started as an innocent link following...when lady paleo put a link in for Paleomg...and it was downhill from there...
I found a recipe for MEATZA...which I in turn turned into my own creation...watch out...it's a doozy...

I was expecting a gut bomb.  One of those meals that sit in your stomach like a brick for days.  While I had this for dinner, I was hungry again the next morning, and that evening was not hungry, but did not have that brick feeling...pretty cool huh?

So, since the kids were at grandma's and the husband was at a board meeting...I altered this recipe beyond recognition...so here's my version of Metza for one (or two.)

First, find a good butcher.  We are fortunate to live near a farm that raises their own cattle/chicken/pigs and butchers them on premises...slaughter at the usda inspected plant as required, but they get them whole back and will do as you like with them...pretty cool huh?

So when I walked in a while ago asking if I could get some lean pork, ground, and spiced like hot Italian sausage...they didn't blink an eye...they just did it and only charged as if it were the lean cut of pork...nice!

Combine your meats and press into a thin circle (I did mine in a pie plate.)  Bake at 400 degrees for about 10-15 minutes.  While that is cooking, put the bacon in a small pan and start to cook it.  Once it has let off a little fat, put the onion and garlic in and let them saute as the bacon finishes cooking.  Take out of the pan and let it drain on a paper towel...less fat, more bacon flavor!  Take the meat patty out of the oven and drain off any fat.  Pat it with a paper towel...you want it a bit dry looking...if you don't the tomato sauce gets yucky.  Spoon the tomato sauce on to the meat patty and smear it like you would on a crust.  Sprinkle the seasonings on top of the meatza...then nicely arrange the other toppings...you can really put whatever you want on it...skip the onion, garlic, bacon, pepper if you so choose...it's just what I had on hand, but let me tell you it rocks! (Paleo would exclude the use of cheese, but it's up to you...) Put it back in the oven for about 5-10 minutes...and enjoy!
Posted by City Sister at 3:42 PM