We are...
Boiling chicken bones from last night's dinner as well as the ones in the freezer. 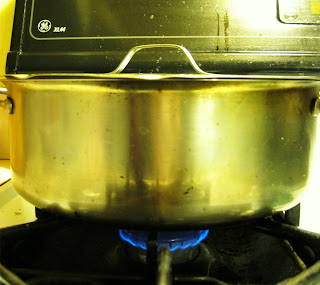 (I wait until I have roasted several chickens and then boil away for broth.)

Dreaming about the garden... 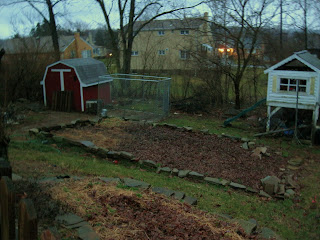 I already have most of my seeds for next year from seed saving, but I am still planning
what I still need to get as well as what else we may want to grow. 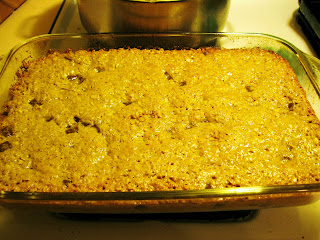 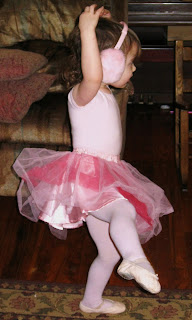 I love the earmuffs with the outfit...she says it's to pretend it's a snowflake dance...
Like in the Nutcracker... 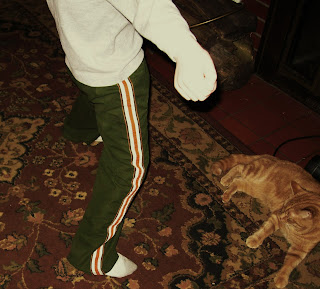 (yes, Pumpkin makes a great fencing partner...when swords are not involved.)
We are still getting ready for C. to take ballet lessons, but we finally set up W's fencing lessons.
Last night we went to his first lesson, an introduction to fencing.
One of the members of the club showed him the evolution of the sword and the history and reasoning behind each of the different eras of swords.
He also learned about why they wore white (they fought to first blood...most easily seen on white...)
and got to watch a match between the champion fencer for the state and the second in the state.
Then he got a lesson in footwork.
They didn't have a foil (fencing sword) in his size so they let him use a practice foil from 1890.
"I get to hold a piece of history!"
He got to aim and push on the teacher's mit.
(If they used real sharp points instead of electronic points,
the pressure needed to trigger a point would sink in about an inch.)
His silly grin let me know he was having a grand old time.
After all, what little boy wouldn't be thrilled to sword fight!

"What is a boy? A whirling noise with dirt on it."
-anonymous

Over our little get together over Christmas, my sister dropped by our parents house and dropped her kids off before a grocery shopping trip.  She asked if there was anything I needed that I couldn't get back in Pennsylvania...
I have always had a weak spot for blueberry toaster cakes.  I love those things.
They are a sweet sticky cornbread pancake type thing...
studded with blueberries...
Just the memory makes my mouth water.
But then came a warning from my sister.
You think you may like them, but if you have one now, they have an awful chemical aftertaste to them.  Keep them perfect in your memory and try to concoct them yourself or you will really regret it.
Then my husband said he recently had a similar reaction to chewy granola bars.
He said that they taste weird now to him and he wishes he could have one.
That put me on a mission.
Make homemade granola bars without the chemical aftertaste.
Well, I am proud to let you know...I have the solution.
HOMEMADE GRANOLA BARS
Got to try them.
I was, at first, a bit worried over the massive amount of honey (1 cup) as not everyone appreciates honey in the household, but as I had bought a gallon of honey about a year back, I figured it's one of those things I should use
(despite the fact that honey found in ancient Egyptian tombs is still edible...)
And let me tell you, I was not dissapointed.
Follow the basic recipe using 2 cups of mix ins and you will be in bliss.
I used 2 cups mini chocolate chips.
But I do have some sunflower seeds in the freezer.
Also recommended is replacing half of the butter with peanut butter.
Just go with this one.
Make them.
AND
DO NOT EAT UNTIL THEY HAVE COOLED FOR AT LEAST 6 HOURS.
They need their time to set up or they crumble.
I cut and wrapped them up the next day for lunches and on the go snacks.
And they are scrumptious.
And they do not have a chemical aftertaste.
So lets see... 20 granola bars (leading natural brand as I did use good quality ingredients) will set you back about $16.
The regular national leading brand will set you back about $9.
So here's the breakdown
Oats (organic bulk)- $1.16
Butter- $2.00
Honey- $1.80
Flour (local organic)- $0.22
Chocolate Chips- $1.00
vanilla (homemade) and baking soda (bulk)... negligible...cents worth
$6.18 for 20 bars or about $0.31 cents each and these are much much much x1000 much better for you.
And cheaper (unless you are a coupon queen.)
And you don't get a wonderful chemical aftertaste.
Husband and Child approved.
YUM!
I will try to get a picture once the second batch I've made this week cools properly...
This batch is made with half butter, half crunchy peanut butter with flax seed puree and chocolate chips.
Posted by City Sister at 6:55 PM 6 comments:

In high school I had what one would call an "interesting" group of people I'd spend time with.
They would do "interesting" things.
Debate
Write
Dumpster dive
yes...dumpster dive.
And the things they would find while diving
such as a case of MSG (put out by McCormick Spices)
chips sealed in the bag, just past date...
or soda that the label was torn and couldn't be sold that way.
So I felt nostalgic when Netflix recommended a newer documentary called Dive!

I watched it.
Well, it was an hour long and if I had made a drinking game out of the times they had "filler shots" I would have been wearing a lampshade within the first 10 minutes (not that I have any tolerance, but you get what I'm talking about.)
So out of an hour long documentary, you could have distilled about 30 minutes of content, which I will say was pretty good.
Basically, they focused of Trader Joe's.
They seem to have a picky clientele, so when cans are damaged, veggies bruised, or one day before expiration, they all go in the dumpster.
And at night, they dive in to see what they can get.
A man fed his family of four entirely off of dumpster food (well 3 including a pregnant wife and then a family of four)
He bought freezers to contain it, and his wife spoke of her rush to preserve items in order to use it all.
Then he saw what he could do to help others.
He coordinated with groceries and food banks and shelters.
He got in a disagreement with Trader Joe's.
He researched how much food goes into landfills (insert about 15 minutes of bulldozers pushing trash around a dump.)
He researched farm waste and found it to be about 50%.
Yikes, that's a lot.
Then a few days later I caught a food network special about their chefs using only discarded food to cook a gourmet meal in order to bring awareness to food waste.
The food the places in both shows that was found wasted appalled me.
Even my husband, a notoriously picky (although on the rebound) eater said that all that pseudo trash was a waste.
I explained that often I go to the farmer's market during the season and will ask them for seconds for the next week.  They are cheaper, they are still good, and it reduces that waste stream...
Just try it...often they are happy getting rid of those seconds.  Also, I found that if I go to the end of the market (final half hour or so) I am much more likely to get the farmer (especially since I go each week) begging me to take things that won't keep until the next day when the market goes to another area.  They know I will find a way to use it.  They know it's appreciated, and they know that I will buy firsts of this and that.
But diving
"Man, I'm to old for that stuff."