Every year that I have had this blog going, I've had an apple post.  I just love apples.
I've made applesauce with you.
I've made apple pie filling with you.
And now, I'm going to share with you how to make by-product of applesauce cider.
And then I'm going to make it into apple pie jelly...not jam...jelly.
And I promise you, if you make it, the house will smell delicious.

As usual, I began by pealing, slicing, and putting apples in a big ole pot.  A really big pot.
Then, since it was a big tall pot, I added extra water so the apples wouldn't stick to the sides of the pot and the top ones would steam as the bottom ones boiled.  This created a massive amount of liquid.  So I began dipping a mug in, straining out the excess liquid, putting it through my handy dandy strainer, and voila! it was apple cider...the best cider ever.  Easy peasy lemon squeezy. 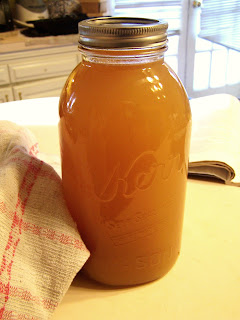 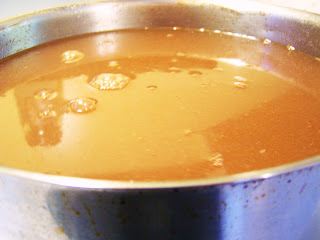 I love apple jelly.  So I put it in a pot, added sugar (1 half gallon of cider, 6 cups sugar) and then the average apple pie spices...a teaspoon cinnamon, 1/2 tsp ginger and nutmeg, a dash of allspice.  I also put in a shot of lemon juice to brighten the flavors.  Apples have lots of natural pectin, but most of it is concentrated in the peel, and since I peeled before making my applesauce, I added some Polmona's pectin at this stage...and brought it to a boil.  Soon the simple syrup created by the liquid and sugar and a touch of pectin created a lovely spicy soft set jelly.  I believe it will be perfect for those Christmas present baskets...

So are you putting by some special items for presents?

And don't forget there is still time to enter THE BUTTON GIVEAWAY!
Posted by City Sister at 8:16 AM