When I was little I fell in love...with chasing my Aunt Ginny's sheep.

I don't know what kind they were, or even if they had fleece (vs. hair sheep which are typically meat sheep.) I loved the woolly smell and their speed, their graceful leaps as they fled the terror that I was. 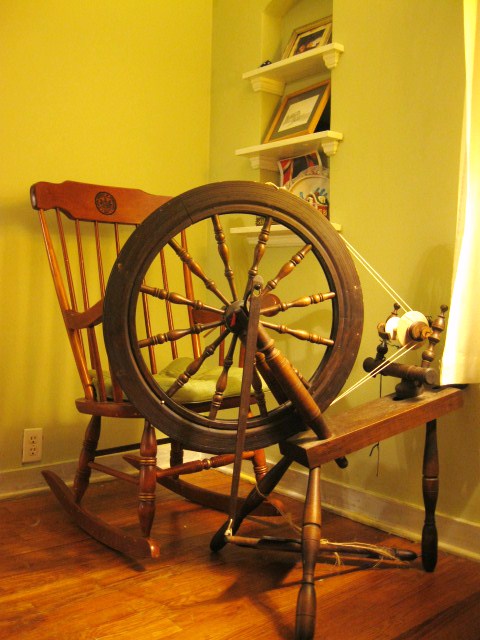 After much research, I found that they were made by J. Rooney in Littleton Massachusetts.  He researched Saxon spinning wheels after getting home from WWII and began reproducing new wheels based upon ones he saw while in England that were made in the 1500's and 1600's.  He then passed his company to his apprentice.  Once his apprentice retired, the company closed.  My grandmother's is a J. Rooney signed model which apparently makes quite a difference when you go to look for parts.

And recently, I finally found someone who could talk me through the issues it had so it could be fixed to it's former glory...and as a bonus got to "play" in a more mature fashion with an Ashford Traditional...And I made a whole ball of yarn!

So out will come the Old English wood cleaner...and out will come some of my special wood polish.  The company went defunct upon the retirement of it's woodworker, so I ordered a new bobbin from the one and only place that makes reproductions.  In February, it may take a journey back to it's former home to get a tune-up and some further help.  But as the lady who I found that talked me through the wheel's rehab schedule said..."She's a gorgeous old dame, but she sure could use a dermatologist and good hug.  Not too bad for a lady nearing her 50's."

So now I start the process,a thorough cleaning, polishing (I hear the Country Craftsman are very thirsty ladies) and woodworking.  I have set up a corner of my living room for once she starts holding a drive band a bit better and wait until she's going gangbusters yet again.
Posted by City Sister at 7:21 AM