(Last year I wrote a post about keeping chickens in the winter.  It was chosen as a spotlighted post for Simple Lives Thursday and has continued to be a pinterest and blog hit.  I have decided to update some of the info.) 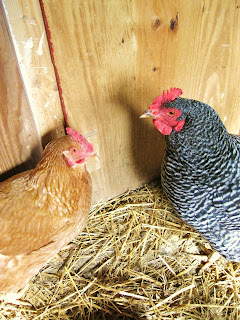 We still do all the things we mentioned before...hot water, let them play outside, lock them up well, and deep litter.  We have though added a few things to the mix.

1. Water.
If you want your chickens to lay in the winter they need water.  We find that while the hot water works well, they enjoy going out and eating snow once it has frozen.  They get hot water once a day and if they dawdle  or get thirsty later, they have the choice of eating snow.

3. Extra food
We have developed a relationship with a local bar/restaurant.  The chef saves salads that didn't sell, veggies that don't look good, veggie scraps from food prep, pasta past it's prime, and other assorted "stuff" that the chickens like.  The chef is great about putting it in a bucket for us and we just go and pick it up.  The owner is happy because it keeps it out of her dumpster, thus saving her money, the chef likes to see food used, and we get free scraps so it's a win-win-win situation.

We also cut their layer rations with corn the guy at the feed store grows on his farm.  He saves non-gmo corn seeds from year to year and sells corn for deer/birds/animal use at the store.  It's less than layer rations, helps with the cost of feed, helps the chickens have extra calories, and keeps money local with local small farmers...another winning situation.

4. Deep Litter.
This year we put most of our leaves in the coop.  They were nice and dry.  There was a total of about 4 feet of leaves in depth at the height of fall.  Now we have about 6 inches.  They are still dry, fluffy, and really seem to keep the place nice and odorless.  I think soon we'll have to start adding straw, but for now, we are not going to until they need a little more.  The chickens have shredded all the leaves and I think this will be some FAST cooking compost.  When we add scraps, we've been adding them to the inside of the coop.  I have already found some of the scraps decomposing nicely in the bottom of the coop.  I've been looking for the article, but a few months ago, I saw an article about a commercial compost operation that was using chickens to turn, de-seed, and debug compost...if I eventually find it, I'll link to it.

So there you go.  I hope this is a help to anyone new or looking for new ideas about keeping ladies in the yard during the winter!