A tinkerbell/giraffe, a witch and a chicken

Halloween is such a fun time! 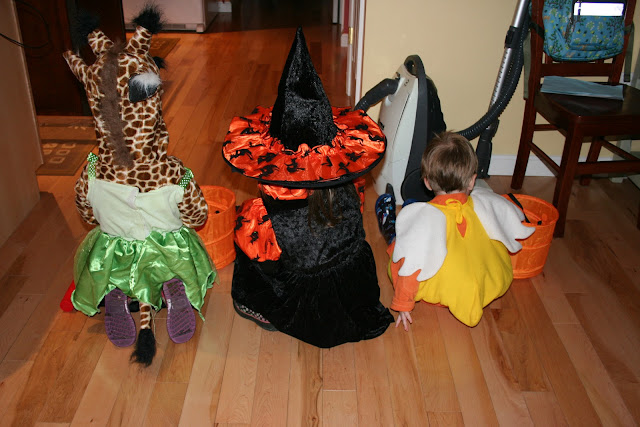 We have found that #2 is the most creative with her costume choices.  Last year, we asked her what she wanted to be for Halloween.  She wasn't quite sure, so my mom and I took her to a store to pick something out.  The giraffe made the cut!   She has a thing for giraffe's.  She also has a thing for Tinkerbell and in her dress up basket, has a Tinkerbell costume.  A few days before Halloween, she decided to go dressed as "Tinkerbell-Giraffe"!  She was the ONLY one out with that costume!  She liked it so much and decided to dress like that again this year!  She cracks me up!

#1 wanted to be a scary witch again!  This year, she worked on improving the scariness with a witchy growl!  She took her role very seriously!  That is, until she saw her new buddy from school out trick-or-treating.  Then the silly kid came out.

#3 cracks me up!  We went to a consignment shop to pick out his costume and he chose a "foggy" (froggy).  He was proud of this costume.  He wore it to the bus stop, preschool drop off and even to the supermarket with me!  As the night got closer, people would ask him what he was going to dress up as.  Up to that point, his choices were 1: a pumpkin, or 2: the "foggy" he picked out.  What does he come back with?  "A chicken"!  Buddy, that wasn't even in the running!  I refused to buy him a chicken costume.  It would be impossible to find something like that locally and even if I found it online, it would have never made it in time.  BUT, I did happen to find a duck costume at a consignment shop, and that did just fine!  The little hat didn't stay on his head, but the rest fit just fine.  Most people thought he looked like a candy corn.  Nobody thought he was a chicken.  He did though.  It's all that counts!

I can't wait to see what they want to be next year.

Do you have any creative costume stories from your little ones?  Do any of you dress up with your kids?
Posted by Busy Mommypants at 12:43 PM