A day on the Paleo Diet

So, for some crazy reason, I have decided to try out the Paleo Diet!  Have you heard of it?  A friend recommended it to me a year ago, so I got the book and it landed on my bookshelf.  With an ulcer that won't fully heal, I decided to give my body the natural recharge Paleo is supposed to provide.  I am following the original Paleo Diet (this book).  Not the 2.0 version, or the one created after that (that will come in a few weeks).  In a nutshell, this means no dairy, grains, starchy tubers (think potatoes), legumes, added sugar or added salt.  That pretty much leaves you with meat, nuts (limited to 4 oz if you want to lose weight), fruit and vegetables that are not tubers!

Breakfast is by far the hardest meal for me.  Coffee with out milk/cream or sugar?  No yogurt?  No muffins, pancakes, bagels or toast?   No waffles with cottage cheese?  NOOOOOOO!!!!

Here is an example of what I eat in a day. 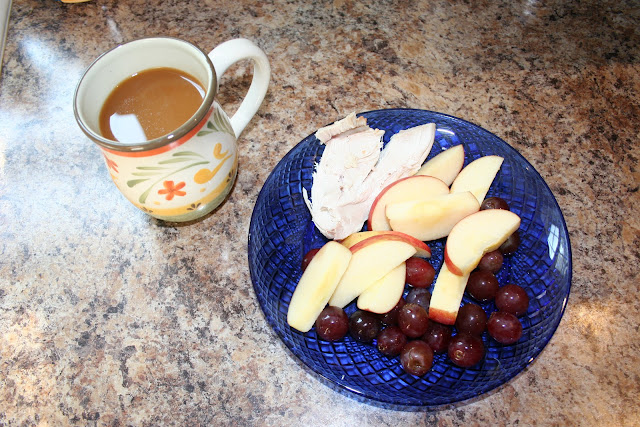 Coffee with unsweetened coconut milk, chicken breast, sliced apple and a handful of grapes.  Having meat for breakfast (other than bacon) is still kind of weird, but it keeps me satisfied a lot longer than my breakfast of choice before Paleo.  I used to make a smoothie with yogurt, milk and fruit.

Everything in the salad but the red pepper came from our farm share.  Lettuce, radish, cherry tomatoes, red pepper, purple cabbage and carrot.  A rainbow of flavor!  I made the dressing with the juice of one lemon, 1 Tbsp olive oil and 2 cloves of garlic crushed.  I put it in a mason jar to let the flavors blend and put it on top when the salad was made.  Mmmmm!!!  The walnuts did a good job making the meal stick with me for a while.

One cup of unsweetened coconut milk, 1/2 cup of frozen blueberries and one banana!  Believe it or not, my sweet tooth is satisfied with this afternoon smoothie.  I will mix it up from time to time and use different frozen fruit, but we recently purchased 60lbs of frozen blueberries for $99, so we are stocked up!  A great way to add antioxidants to my day.

That's it!  I used the onion as my base layer, then put the chicken on top.  I mixed up the celery, red and green peppers and garlic and placed them on top of the chicken.  Then I poured the tomato puree on top, set it on low for 8 hours and forgot about it until 6!  I made noodles

It was so delicious!!!  Nothing added.  Just vegetables and meat.  Who'd a thought it would turn out so good?

Believe it or not, the whole thing is growing on me.  I can deal with no ice cream, bread, or added sugar/salt.  As a general rule, we should limit that kind of stuff anyway.  The yogurt, milk and grains (quinoa, barley, steel cut oats) have proven to be difficult, but the funny thing is... I don't crave sweet stuff as much as I thought I would.  The great thing about this plan is that, generally speaking, you can have as much meat, fruit or vegetable as you want.  So, when I want something sweet, I'm not deprived of sugar all together like some other diets.

The health benefits will be worth it in the end.  That's the opinion today, anyway!
Stay tuned.

Linked to Homestead Revival
Posted by Busy Mommypants at 11:54 AM