The reason we went camping was so we wouldn't have to drive as far to go to The Mother Earth News Fair the next morning.  We thought we'd wake early with the sun and after a quick breakfast, go to the fair.  Instead...we got up late due to the overcast leftovers from the night as well as the late bedtime the night before.  We had a slow breakfast due to the bees and the water taking forever to boil (and nothing gets done until coffee is ready.)  and a slow pack up due to the mud and water from the night before.
﻿
By 10:00 we were all ready to go to the fair.  The advertisements made it look like it was going to be like the Commonground Fair Country Sister and I had grown up going to.  Let me tell you, it was not.  It was at a ski resort's conference center.  Inside there was a book fair as well as some lectures and different products being sold (composting toilets, goat milk soap, composting bags...that type of stuff.)  We could have spent some time looking at the different items, but with a stroller, a toddler without a nap, and  a bored 5 year old, we got to pick up brochures on things we found interesting.  We bought some insect repellent bags to ward off the stink bugs (for those living in the Pittsburgh area...they work!!!)  as well as some seeds for the fall planting (forgot to think ahead and buy them before the feed store put them away for the winter.)
﻿﻿In order to cheer the kiddos, we took them outside to see the animals.  W.  saw turkeys and started talking about the turkey we used to have (aptly named "Thanksgiving Dinner.")  He also saw some horses (sloppy eaters we noted)  and some Alpacas.  W. and the hubby looked at the chicken tractors to get some ideas as well as some rabbit hutches. 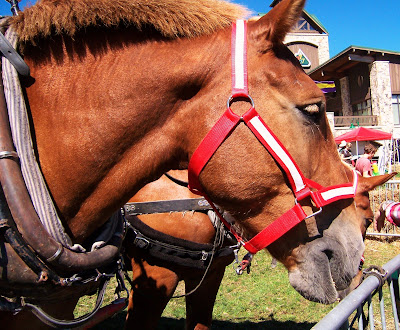 We knew that bees would be there as there were several apiary companies represented.  Before going, we told W. that only well trained bees were allowed to go.  Also, all bees were going to be in glass cages so they could not sting.   This seemed to suit him for he spend about 20 minutes looking at them walking around in their combs.   He pointed out the honey and other parts that we'd talked about before.
I got to look at some more seeds, Jane Goodall's roots and shoots programs, and the Eat Fresh, Eat Local PA booth.  We saw the wood boilers and the chairlift rides (the kiddos were too little to go on.)  and then turned around to go back in.  We saw the book fair and the hubby bought a book about compact cabins.
Someday, we will have a place to build one of our own.
﻿
Posted by City Sister at 1:57 AM