My sister and I both adore bacon...
As you may have read last week in our bean-off it is true.
My sister even raises beautiful pigs which produce a lovely bacon.
I was even lucky enough two Christmases ago to be gifted a whole pound of it.
So I promise, cross my heart and hope to die stick a needle in my eye, promise this is the last time I will write my Scruptious Saturday about a baconed item...who knows...maybe next week I will even go vegetarian for pennance of my bacon consumption.
Any one who knows my husband knows one thing.
He does not like veggies.
When I first met him he claimed, and I quote, "It isn't a meal unless an animal and a tree died during the process of it's making and/or consumption."
Even his school's cafeteria worker was stunned when he actually took some salad one day.
I have a recipe that will entice even my non-veggie loving husband to eat spinach.

On the other hand, I was a vegetarian when I met him.
I only began eating meat right before I got pregnant with W.
I was dreaming of hamburgers every night.

I will admit, I have weird taste in food.
Once in college, a psychology professor asked each person to write what food item they were craving at that particular moment on a card.
It was to demonstrate how culture has influenced people's taste in food.
Most people wrote:
1) Chocolate
2) Coffee
3) Pancakes
(note 8:00 am class)
I wrote spinach and butternut squash.
Odd.
So here I will share one of my favorite spinach recipes.
One that will confirm my theory.
Everything is better with bacon. 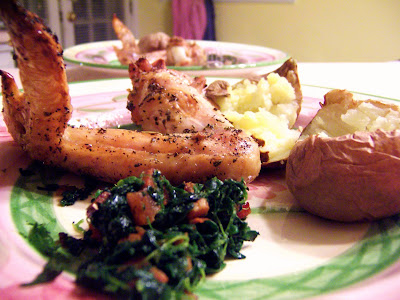 Saute of Spinach
with bacon and garlic
4 thick slices of bacon
4 cloves of garlic
1 package frozen spinach (thawed and drained)
that's it!
Cut bacon into small pieces and place in a frying pan over medium heat.  Chop the garlic and add to the bacon once it starts releasing some fat.  Cook until the bacon is done and the garlic is golden brown.  Add the package of spinach and cook until the spinach is warmed through (and tastes like BACON and GARLIC.)
Even though I do firmly believe that everything is better with bacon, I will say that it is still good if you saute the garlic in olive oil and then add the spinach.  It can also be done with fresh spinach, it's just not in season right now...
And I love bacon!
(locally pasture raised and smoked...once you have it, you can't go back to the slimy grocery store stuff.)
I served it with chicken wings raised locally and some local potatoes.  Amazing what you can find in your own "backyard"
(If your backyard was 20 miles or so.)
So what's your favorite enticing scrumptious recipe?
Posted by City Sister at 7:06 AM