Back in our carefree, childless, days we'd go camping.  It was fun and often a spontaneous trip to the wilderness (no campground for us...just the Allegheny National Forest)...we were just starting out and low on funds, camping was an excellent "vacation" choice for us.  After our son was born, camping trips became less frequent...the other change is we started going to campgrounds since they seemed safer.  We'd go with some frequency before W. became mobile, and then just as he was gaining some sense of responsibility as he neared three, his sister came along.  She is now two...she's a wild woman...she's never been camping...until now. 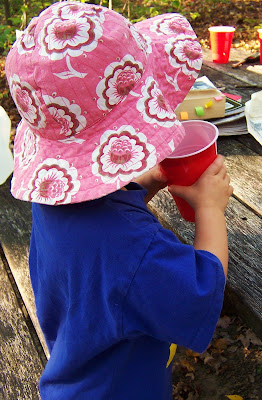 We left Friday afternoon.  The children were excited.  C. could only talk about sleeping in a tent and "no touch fire...hot."  W. had a vague memory of going camping and was excited about s'mores, hot dogs, hiking, and what he may see in the woods (binoculars and a bird book made the trip with us.)
So we set up camp.  It took a bit of wrangling, but we managed to put up a tent and keep the kids (and their leaves and dirt/mud) out in the process.
Since it was a state run park we were not allowed to bring wood in (due to diseased wood and non-indigenous bug problems.)  The hubby got forestry service wood, while I started a small fire with twigs and wood left by the previous campers.  Hubby returned and made the fire roar enough for me to make... 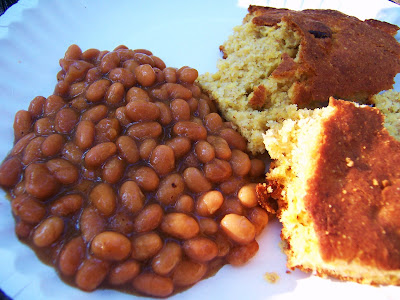 ...(all hot dogs were consumed while waiting for the beans and cornbread.)

After dinner, the children played in the woods behind our site.  While pretending the trees were evil giants (that must be destroyed with his stick sword) W. got stung by a ground bee.  He was eventually able to be calmed by a story about Sir W. and the bee.  (I bet the promise of s'mores also helped a bit.) 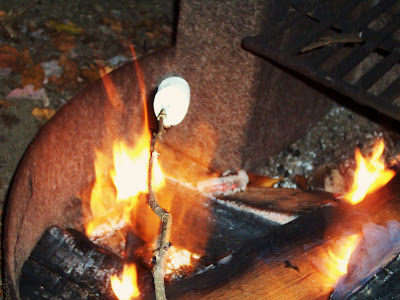 After the s'mores, we attempted to get the children to bed...bad idea...sugar and excitement tend to keep kiddos awake.
Eventually, we all fell asleep in an exhausted heap.  That night it poured cats and dogs (and perhaps a few elephants were involved as well.)  We were snug and dry cuddled up in our tent and sleeping bags.
The next morning, hubby got a roaring fire going.  There was a chill in the air and the earth was wet from the night's rain.  We boiled water to warm and dilute our cold brew coffee.  Then I made...bacon...then french toast cooked in the bacon fat...is there anything better than bacon? (cardiologists opinion excluded.) The cast iron frying pan is wonderful.  It distributes heat so perfectly. 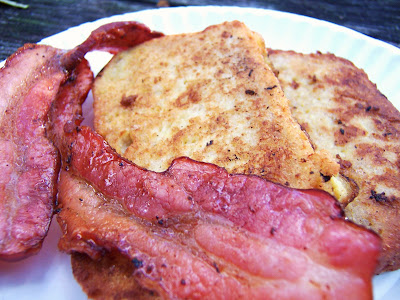 While eating breakfast, a maple leaf slowly floated down to the table.  It was too perfect.  I needed to preserve the moment.  Fall is truly here. 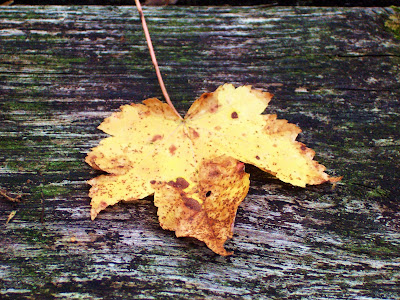 The moment was short lived as Sir W. decided to go back to fighting the tree giant and this time got stung five times. Hubby ran for the forest and carried him to the table where he slapped the bees and stripped the boy to check for stingers.  We got the stingers out and put him in the tent.  I told him a story about my great-grandfather's farm and the ground bees that his uncle and I stomped one hot summer to the anger of our great-grandfather.
We then talked to him about the bees that we'd be seeing the next day.   But that is a tale for another day...
To bee continued...
Posted by City Sister at 1:23 AM