In just a few days they are predicting snow.  SNOW.  Snow in October is nothing special in many parts of the country, but snow before Thanksgiving here is a special event.  And since C. has grown out of the hat I made for her two years ago, she needs a new one.  I looked through my stash (since I am a sucker for the singles bin of really nice yarn at the yarn store and tend to have lots of hat quantities of yarn laying around.) I found a nice teal color and a purple blue color for her to choose.  Of course she chose the purple.  She is a girly girl. I pulled out my handy dandy go to pattern (the boyfriend hat) and am adjusting for her little (non-man sized) head.  So instead of casting on 100, I am casting on 90 and going from there. 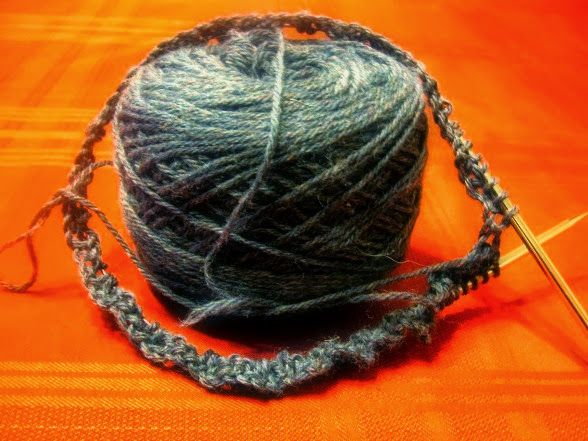 Ever since the Mommy Busy Pants became a mommy/auntie, she has called all of the girls, "the girlfriends."  There are quite a few girls in the family.  So in her honor, I have to change the name of this particular hat to "The Girlfriend Hat" since it's for my little gal pal.

For reading, I breezed through The Dirty Life by Kristin Kimball.  It was one of those books I read in two evenings after the kiddos went to bed.  It's not one of the romanticized books of move to the farm...everything is fantastic type of books.  No, it's about dirt, blood, poverty, death, exhaustion, and community.  At it's core is a city girl who everyone thinks drank the kool-ade and has gone off the deep end and her farmer boyfriend/husband who has an amazing work ethic and ability to build community.  It's an engaging and quick read.

Linked to Ginny's knit along
Posted by City Sister at 8:46 AM