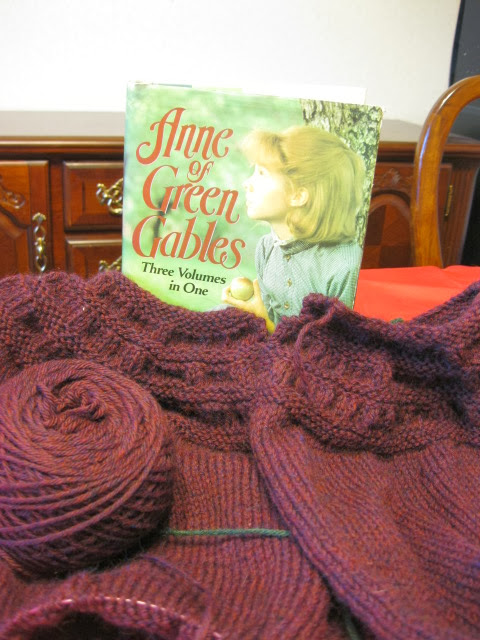 A long time ago, my in-laws gave me some birthday money...with a stipulation.  It was not to be spent on the kids, or paying bills, or anything practical.  It was for me and just me.  I think I spent the actual money on groceries or some other mundane living expense, but the idea of the birthday money still sat there.  And then I got an idea.  My favorite sweater, which had been demoted to house sweater, which may get demoted to "throw on to go care for the chickens" sweater is falling apart.  No matter what sweaters I may have in my closet, they are not as comfy and perfect as my favorite sweater.  I have decided to tackle making a sweater.
I have in the past made the shalom pattern for a sweater, but the one I made is sleeveless and I made it out of cheap wool, so cheap that the drape is all off and I think it cost me $4 to make.  I also have decided to never use yarn over button holes.  They just seem sloppy and lazy.  Instead I am going to go with these buttonholes from now on (in fact her videos are the only ones I will watch on matters of technique.)

I studied patterns on ravelry, and even got a reluctant husband to look at the ones I narrowed it down to. He claims they all look alike.  I had it down to Tea Leaves and the February Lady Sweater.  The more I read reviews and pattern changes, the more I realized that the February Lady Sweater only works with certain bust sizes, and would be a bit silly looking on me.

My husband was home a few weeks ago on a Saturday, so he watched the kids as I took off on a grand adventure to a yarn store that sold just yarn (as in not a craft store with a cheap yarn corner.)  I then looked over their patterns and decided to stand by my decision to make the Tea Leaves pattern.  Seeing a store employee wearing the February Lady Sweater only cemented my decision.  Don't get me wrong, I really love the pattern, but it would not be a flattering look for me.

The other thing I love about a yarn store is that the employees all knit...all...the...time.  The employees know what they are talking about.  So when they recommend an extra skein because I have a long torso, I buy an extra skein.  I always have trouble with shirts being long enough so it makes sense.

I have already made some decisions on how I am going to change it for my tastes.  First, I am going to do the one row buttonholes as I said above.  I am also going to make it long in the torso because that's what I need.  The button row is going to have buttons all the way down rather than just two since that is how my favorite sweater is made.  That way I have the option of only buttoning two, or all.  I am also contemplating putting the yoke pattern around the wrists and bottom of the sweater.  I am not quite sure if that's what I want to do yet.  If I do, I may put a ribbing pattern rather than a garter stitch around the wrists.  Since the pattern didn't specify a cast on, I decided to use a cable cast on to keep the neck smooth and flat (again the knitwitch has a great video on this.)

They had the Madeline Tosh yarn that the pattern is made for, but at $18/skein, that was not an option.   So I looked at other options.  One I really liked didn't have enough yarn in stock to complete the project and dye lot couldn't be guaranteed if they ordered more.  I then selected with the help of the knitting employee about 5 different colors.  She then started having people vote on the color I should use.  It's the kind of place with people always there willing to help out or give an opinion.  I bought, by consensus, Cascade 220 in nebula heather, and it is very pretty.  It is a base of a reddish purple with flecks of red and blue.

As for reading, I am currently reading a copy of Anne of Green Gables that Country Sister gave me many years ago.  My son found it in a bookshelf and decided it was time for me to read a really big book to him.

Linking to Ginny's Yarn Along