The garden is a living thriving organism.
It eats, breaths, reproduces, and dies.
From the first lettuce and spinach leaves of the Spring, to the death throes of the peppers as they succumb to the first freeze of the fall, it lives.
In the meantime it feeds and nourishes our family and allows us to put a little by for the winter.

As for the chickens, it is obvious that they are living organisms.
They eat, breathe, (some reproduce), and die.
From the first eggs of a cold March morning, to the piddling out of the eggs in November, they nourish us and provide a modest income.
But one must remember that they are chickens and "respect the chicken-ess of the chicken." as Joel of Polyface would say.
The chickens here have a purpose: eat lawn, get rid of kitchen scraps and weeds, provide manure, provide eggs...maybe some mild chicken antics and entertainment.
When they do not live up to their end of the bargain, they become loads on the economy of our land...after all, we only have a quarter acre and need to use it as efficiently as possible.

So a few months ago we started getting more requests for us to "board" chickens in return for eggs... so we picked up some new chicks and low and behold three turned out to be roosters.

In order to avoid being arrested for cock fighting (as they started to spar) they needed to be harvested.  Just like the garden, everything has it's season.  Weeds that invade the land, make it difficult for the planned plants to grow, and cause general disorder in the garden are harvested.  Too many bad roosters are the weeds of the coops.

Just to get things straight, I am an omnivore.  I eat plant products from the garden, local farmers, and from the regular grocery market.  I get most of our meat in bulk from a local farm that takes great care of their herd of cattle, and sells similarly raised chickens and pigs, from other farmers in their meat market.  Occasionally, I buy from the grocery store since the farm is a little bit from here, but that is very rare.  (It's odd thing is that the grocery store is more expensive than the all natural, hormone and antibiotic free, pasture raised, meat market!)

And occasionally, I get our meat from the backyard. 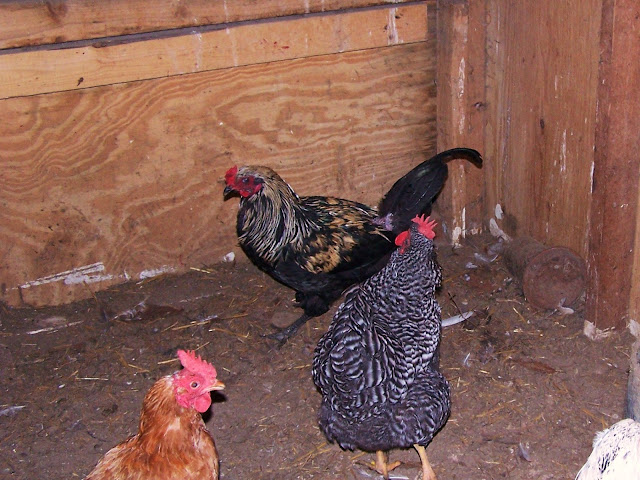 I will spare you the gory details, but right now I have two roosters in my refrigerator "chilling out."  Yes I said I had three roosters, and only two are sitting in our fridge.  That leaves one in the yard.  He was picked on by the other roosters and is sweet.  He calls gently to the hens to tell them that I put scraps out.  We have never heard him crow.  He runs around to herd the girls into the coop at the slightest hint of a threat.  And he is beautiful.  He has glossy black feathers that shine green and blue in iridescent splendor.  His tail feathers arc.  His golden long neck feathers tell his mood. My husband is attached to him.  That says a lot about this roo's personality.  If he remains a beautiful gentle and quiet boy, we hope to be able to raise our own chicks and not become rooster pot pie!

And as a side note don't forget to enter in our button giveaway!

linked to the barn hop
Posted by City Sister at 5:40 AM