As a little girl, I remember making up signs to put on my door.  These signs said things like "KEEP OUT", "My Room" and "No Boys Allowed."  Defining my space was very important to me.  I had two brothers.  One older brother that was a rule follower and never tested limits.  My younger brother did not know what rules or boundaries were.  He tested limits every second of every day, from the moment he opened his eyes to the moment he went to sleep.  He was a pain in my tush!  These signs were for him.

The signs have started in our house, only they aren't on bedroom doors and they aren't directed at siblings.  This one is on the inside of our front door.  Maybe she's telling us not to go outside so that the terrible monsters living in the woods in our back yard will not eat us?  I should ask her.  But, she's at school and I will forget by the time she gets home. 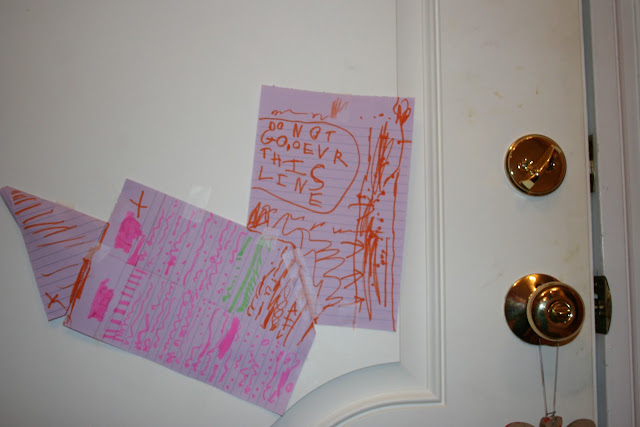 The sign greets me every day as I walk downstairs in the morning.  That and the gross dirt all around the handle and dead bolt.  Ick... maybe I should go take care of that now!  It will be my mission until I hear someone crashing to the floor and get distracted... Murphy's Law, right?

I am finding that #1 is starting to need her own space.  She is always saying how her little sister "is so annoying!!"  She often asks for time alone where she can read or practice piano without #2 pulling at the books or slamming on the piano keys.  They are fairly close in age (20 months apart), so they either really get along, or really disagree.

This whole boundary thing has me laughing over here.  Have you ever seen the TV Show from the 90's called Full House?  If you have, we aren't that far from the DJ Tanner moment where she took tape and made a line down the middle of the bedroom she shared with her little sister Stephanie.  They each had a side and were not supposed to cross the line.  My space and your space.  Easy enough.  That is, unless you have a little sister that likes to test limits like #2 does.  The boundary seems like a good idea, but it will probably cause more problems than anything.  Here I am, thinking about a problem that hasn't happened yet.  Chill out Mama Bear!

Boundaries set forth by a 5 year old.  It should be interesting from here on out.
Posted by Busy Mommypants at 9:37 AM