Many moms cook a ham for Christmas Dinner.

Some moms then take the ham bone and cook it down and make soup with it. 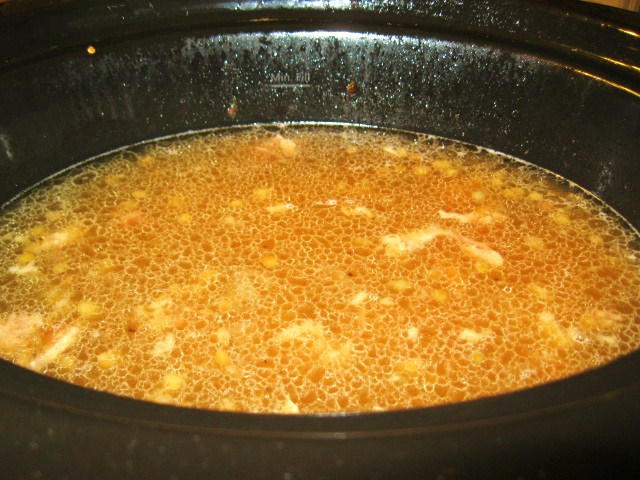 And then a home school mom takes the bone pieces that have cooked down, and give a lesson on the anatomy of the knee. I love little (mom)ents of incidental learning.  Both of the kids watched as I manipulated the bones and showed how the patella acted as a brake to stop the knee joint from going too far forward.  Why?  they ask.   Well, it would be awfully difficult to walk if the knee went all over the place...imagine balancing and moving that way?  After some thought, they agreed that it would be very difficult, but if it did work that way, they'd probably adapt to it. They experimented with their own knees to mimic how I was moving the bones.  They also observed how the knee bone of the pig broke as it cooked overnight.  They saw where the weak points were and we discussed how muscle (ham meat) kept the pig's joint safe as it moved around so the bone was less likely to break.   We looked at tendon attachments and how similar they were to our own.  They also looked at the cut part of the bone and saw the bone marrow.  We talked about how the bone marrow makes blood cells and discussed leukemia.

I find it sad that many moms I know shy away from teaching their children that the meat at the store was once a living breathing creature.  They are afraid that their child will shy away from eating meat.  I find my curious children love knowing that the food on their plate was once alive.  We visit the farm that we get most of our meat from and see the animals.  My son often then says that he'll eat the meat because he doesn't want that animal's life to go to waste.  He wants to honor the animal.

And as for the soup...
1 ham bone with meat on it
2 onions
5 carrots
1/2 a red pepper
olive oil
beans of your choice (I use a mix of red and green lentils and barley)
Salt, pepper, and Italian seasoning to taste

Place the ham bone in a crock pot with water to cover it and let it cook overnight on low.  Scoop out the ham bone and ham pieces.  Remove any cartilage or bone pieces as well as chunks of fat or skin that you see. Chop the meat and return to the stock.  Saute the veggies with a bit of olive oil and put in the pot.  The saute will add some sweetness to the veggies which complements the sweetness of the ham.  Add the beans and turn on high until the beans are tender.  Add seasonings right before serving as added salt will prevent beans from softening if added too early.

linked to Simple Lives Thursday
Posted by City Sister at 8:33 AM