Mornings are tough, as I am sure they are with a lot of you too!  The one thing we are constantly working on (especially with #1) is completing tasks in a timely manner.  Each kid has their own struggles.  #2 is the queen of doing things fast in our house.  #1, not so much.  This is where she struggles.

After dinner pick up, we tell all of the kids to go brush their teeth and get jammies on.  Twenty minutes later, this is what we find:  #2 with jammies on, teeth kind of brushed and she is dancing around the upstairs singing frosty the snowman.  #3 is running around with no pants on (per his usual) trying to find someone to help him with his jammies.  He can only do pants off at this point.  We're working on shirts.  He's only two.  #1... well, she is just standing on the step stool in the bathroom making faces at herself in the mirror wearing the clothes she wore to school!  Teeth not brushed, jammies not on.  Jammies not even picked out!  She has been doing this the entire twenty minutes.  If you ask her why these jobs have not been done yet, she will say "I forgot what I was supposed to do."  FYI:  This kid is full of bologna.  Generally speaking, 5 year olds should be able to remember and complete a list of at least 5 things, as long as they are part of a routine.  This kind of routine can be established within 2 weeks.  This is a proven fact.  It is something I learned at a kindergarten readiness workshop last year.  It is NOT a dream made up by a mother of three in New Hampshire.  It's a "for real life" thing!!!

But, in order to keep my sanity and try to force my kids to be more efficient, I created some routine charts.  The "MORNING" one below is the one just outside of everyone's bedroom door.  Keep in mind, items 5-7 are, indeed, a pipe dream.  They never happen.  This doesn't bother me.  I consider it a victory if items 1-4 are completed.  If they are completed within 30 minutes, I want to throw a party! 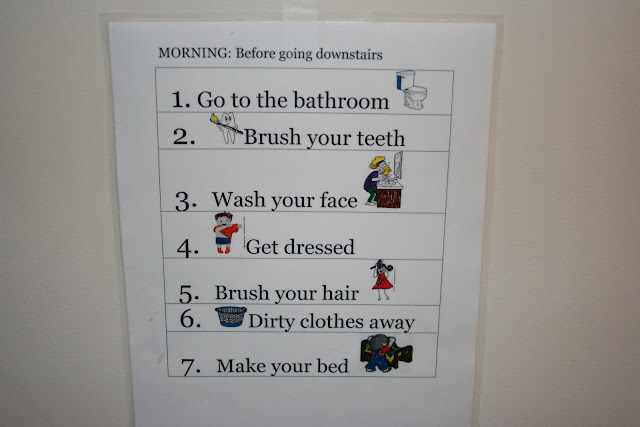 The charts are more for #1 than anyone else, but I included pictures just so that the other little ones could participate since they can't read.
So, when #1 tells me she isn't sure what her responsibilities are, I tell her to look at the chart.  It's much easier than me telling her (okay, yelling) "go to the bathroom, brush your teeth, get dressed... etc." seven million times.  It's spelled out for her. 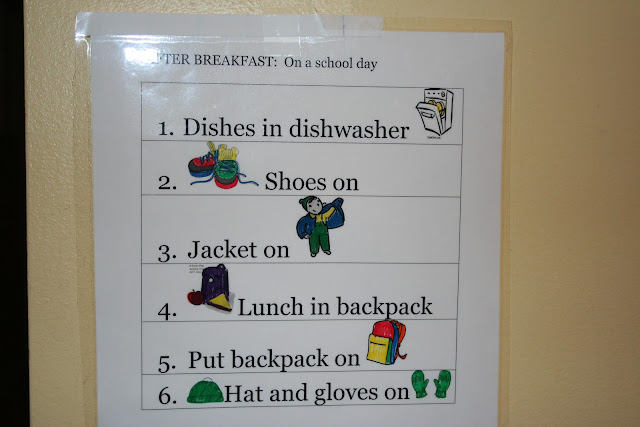 I have routine charts for morning, afternoon and after dinner.  They help me out tremendously and I find myself yelling a little less.  It was really fun coloring each little picture with the small crayola markers!  Brought me back to my school years!
Posted by Busy Mommypants at 9:52 AM