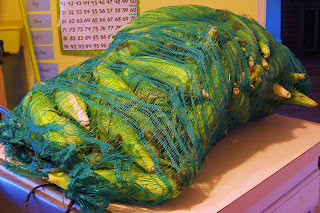 That sack of corn held 77 ears.  My mom said that up her way corn is going for 75 cents an ear...here in the beginning of corn country the stores are selling conventional corn 5/$2 (40 cents an ear.)  The farmer's market was selling  13/$3.50  (fresher and more local...while they are not organic, they follow similar practices but can't afford to get certification...and cheaper at 26 cents an ear!)  or my 77 ears for 25 cents an ear...not much of a discount from the regular price, but I'm glad to pay it to a local rather than having a middleman such as a large grocery store chain (even if it is a locally owned chain)...
What I did get?
15 pints of cream style corn
(I think it's gross out of the can...it smells and looks like something in a diaper, but homemade it's not so bad.  Not to mention the brownie points I get since the husband would bathe in it if allowed he loves it so much.)
7 pints of whole kernel corn
16 ears frozen corn
8 ears eaten fresh.
So at grocery store prices it would have been about $1.50/can (organic on sale)
$4/4 pack for the frozen corn
$3.20 for the fresh
also known as $51.20 for the same corn processed.
Sure, canning companies must profit, employ, and keep the overhead...groceries must then have the same issues... but it is more than a 50% markup from the fresh from the farmer cost.
(note: cost does not include the price of the jars...I have them...so all I had to buy was water, gas for the stove, and lids ($1.25/12 pack))
So here is what I did...decide if it's worth the time or not...
Creamed corn 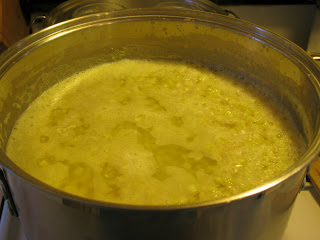 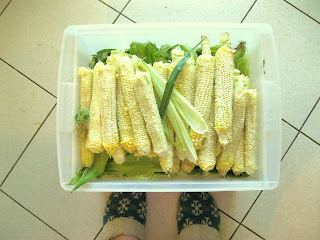 In the end I gave the chickens all the leftovers...they can try the bits left on the cobs...they will peck at the husks, but most likely are using them to provide fun scratching material.
As for the corn products, it really is that easy...and rather reassuring (disclaimer...follow safe canning advice from trained professionals, this is provided as just an idea of what is done... disclaimer over.) that you know exactly what is in the corn...no yellow dye to make it pretty or unnameable chemicals for texture...just corn, water and salt...and don't forget the love,
Yes...
Lots of it.

Email ThisBlogThis!Share to TwitterShare to FacebookShare to Pinterest
Labels: cost analysis, do it yourself, harvest, putting food by