Teaching your own kids to be independent seems like it should be an easy thing to do, right?  Just make them do what they are capable of and they will be positive influences on society in the future (with fingers crossed, of course)!

Yeah right!  What if they "don't want to", or they "can't find" it???  What then?  You have a deadline to be out the door by 7:30 if you want to make the bus by 7:37.  It's 7:29 and she doesn't have her jacket, boots, hat or gloves on.  This is the point where I would typically throw my hands up and say "we'll deal with this another day."  I can't do that anymore.  She's in kindergarten and pitches fits when she can't find things and that tells me we've been doing too much for her.  So, I said (not out loud but in my head) "NOT TODAY!"  I went in the basement with the other two all geared up, got them in their car seats and opened up our garage door.  She knows what that sounds like, so I was convinced it would put a little speed in her step.  Not so much! To make a long story a little shorter, we ended up missing the bus and were 5 minutes late for school.  My little rule follower was marked tardy.  She was so embarrassed.

I really wish doing things in a timely fashion wasn't so hard for her.  She is such a wonderful kid with so many amazing qualities.  But if I want to shape her into an independent kid, little pushes are necessary, but she makes going against the grain seem like she's the victim in a horror film!  I hate that for her.

While she isn't the fastest kid out there, she is very independent when it comes to reading and writing.  I know I take that for granted most days.  We didn't have to sit down with her and help with words, or finger spacing, or following with her finger.  We started with a Learn to Read series by The Starfall Team when she was 4.5 and she picked it up quickly.  She went to kindergarten, and her vocabulary increased even more.  She is a bright kid.  She reads stories to her brother and sister at night and writes her own thank-you notes.  This year, she even wrote her own letter to santa.  It's quite amazing actually. 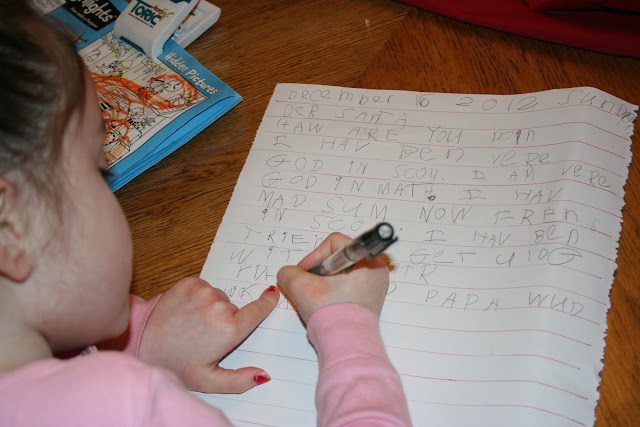 When she wants to be, she's very independent.  For now, we'll focus on the small victories!  Like the fact that she can tie her shoes!  :)

I love my little pumpkin pants!
Posted by Busy Mommypants at 3:39 PM