There is this great blog I stumbled upon where a woman uses old materials from around her house (or from the trash) and creates new things with them.  Her objective is to give new spaces an old rustic look.  She has done things like paint words on old boards, scratched them out a little and made them look like old antique signs.  She attached a few together, stuck some painted legs on them and made side tables.  So inspiring.

There is one project I tried to replicate.  She took 5-6 old boards about 5 feet long and attached them in the back.  She then took a bunch of picture frames, arranged and attached them to this new background and hung it over her mantle as a focal point.  She even attached a little vase to the boards and stuck some fake flowers in there too.  It is beautiful!

So, I was lucky enough to find someone locally that just tore up a floor in their 100 year old house.  SCORE!  Getting rid of the boards before winter had been on her to-do list for the entire summer!  Finding someone willing to get rid of old boards was on mine for just a few weeks.  She helped me and I helped her!

The boards were PERFECT!  They were in a pile outside for a few months so they had a bunch of dirt, leaves and junk on them.  J washed and attached them together for me.

This is my final product!  I just have to add pictures to the frames and maybe a little sign on it with our last name etched on it. 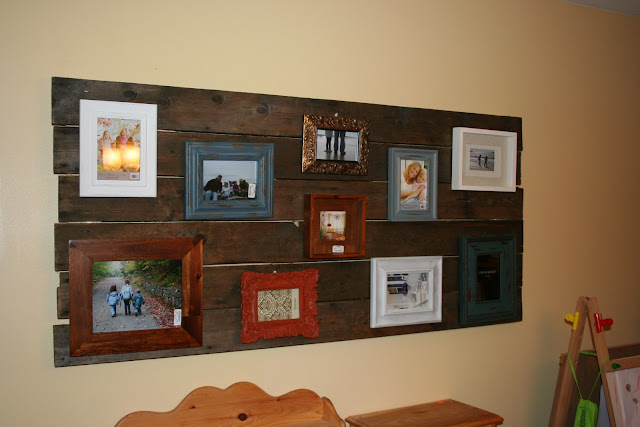 It's kind of blurry, but you get the gist.

When J assembled the boards, there was little to no space in between them.  They must have swelled from being out in the elements.  The heat from our wood stove sucked the moisture right out of them and left spaces between each board.

I am going to try getting more boards from my new friend.  J is thinking of creating a work station for the girls to put right under this.

Posted by Busy Mommypants at 12:13 PM